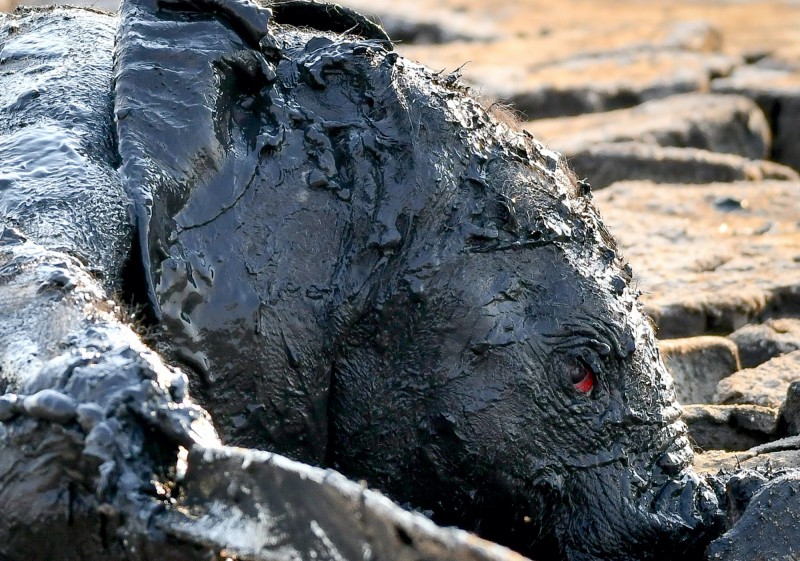 How we saved a baby elephant from drowning in mud

The vast plains of Botswana are bathing in sweltering heat. Animals are hiding away in the shade of trees and the bush and when we open the windows on our 4x4 it feels as if we’d just opened the shaft on a furnace. 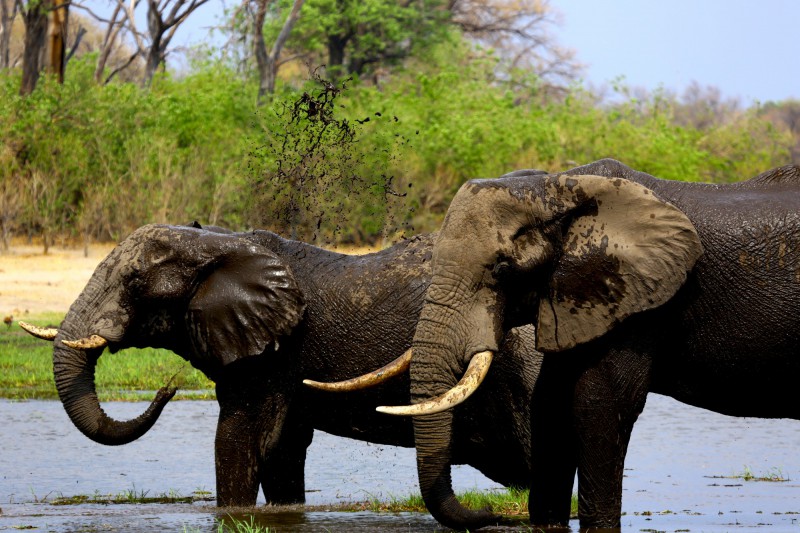 To continue further to the grasslands, a herd of elephants first needs to cross a small river. None of them seem too eager to fort it. They’re afraid. The alpha female trumpets loud and starts pushing a baby elephant into the water. The little one has to obey. It is not long before the whole herd’s safely lolling in the water, splashing one another and loafing around in the mud. And we’re enjoying the show. There are a few baby elephants, awkwardly moving their trunks and learning to use them. Out of the blue, a giant male elephant starts making his way towards us from the other side of the road. He approaches our car, starts sniffing it and feeling the bonnet with his trunk. We’re sitting completely still, but he’s calm. He’s just come to greet us. He moves on towards the river and we decide to leave for Tsobolos, where we’re spending the first night. On the way we stop to help a couple of young Spaniards whose car got stuck in the sand. We’re unwinding a tow hook and pulling them out. We’re rewarded with a delicious Spanish ham and little do we know about how useful this mission will soon prove.

We’re nearing the camp, the sun is setting down like a big fiery ball and large herds of buffalos and elephants are stumping towards the water hole. I’m cooking dinner and don’t know where to look first. Wildebeest, giraffes, kudu, all coming towards us from the bush to drink from the only source of water in the area. They’re less than fifty metres away. Suddenly, Martin points to a different direction. About a hundred metres away a pack of fourteen African wild dogs appear. The animal is an incredibly rare sight. Now they’re in front of us, literally just a few metres away. The camp is not fenced, it’s part of the wilderness. They could be right there with us at any second. Luckily, they’re turning around and leaving for the bush to hunt small game. 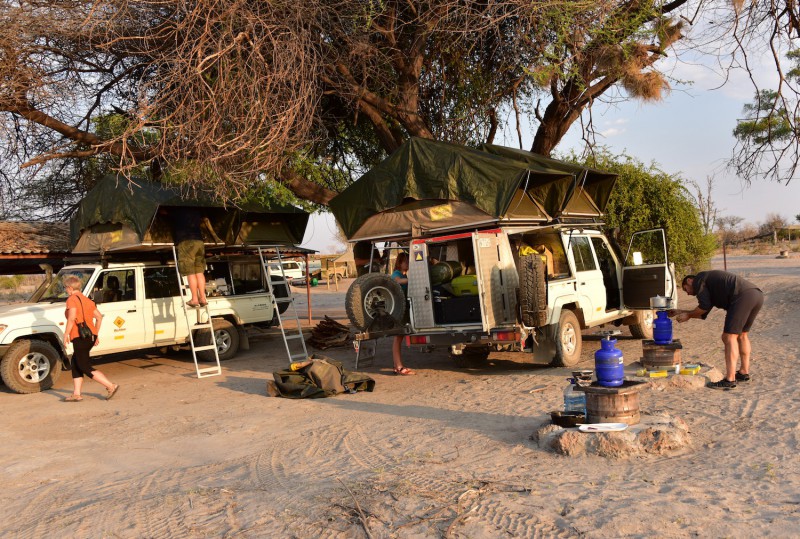 The sun is slowly starting to set and the darker it gets the more elephants are coming to the water hole, trumpeting and pushing each other to secure the best drinking spot. Other animals stand no chance. It’s dark. We can hear the hyenas’ howling, it’s unsafe to stay outside and so we’re crawling into our tents to sleep as we’re waking up at 5am to set out for another safari. Sleep. I wish. I didn’t sleep a wink. The noise at the water hole and the adrenalin pumping through my veins wouldn’t let me. In the middle of wilderness, only a few metres from a herd of giant animals. At some point during the night a sharp noise pierced my ears. An elephant who stranded away to stroll through our camp and demolished our neighbours’ camp stool and table that was left in front of their tent. Not too long after another rattle comes right from our car. This time a honey badger knocked over the cooker and a wooden plank with some rice leftovers from dinner. Before the sunrise everything went quiet. I finally fall asleep only to be woken up by some birds. We’re camping under a tree with dozens of nests and their squawking is louder than any alarm. 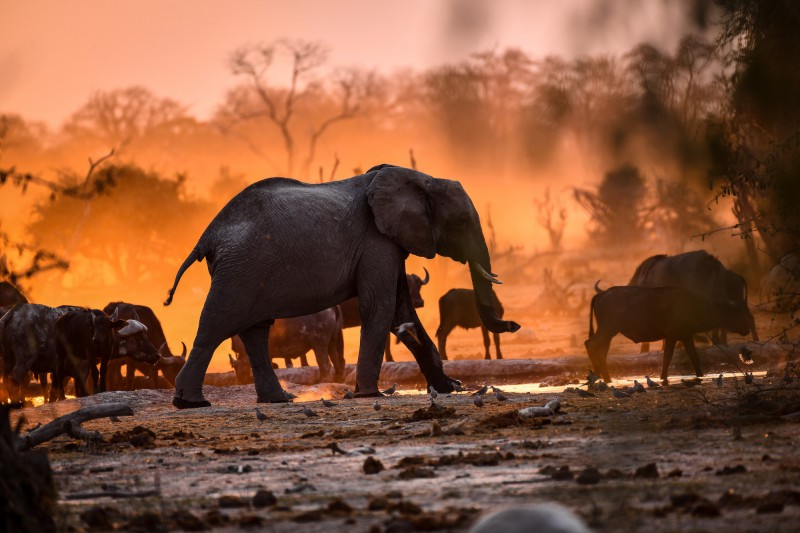 Herds of animals in african sunset

While Maja and Alica are making coffee, Martin spots a car coming to the plain through his binoculars. About three hundred metres away, he sees an elephant trunk sticking out of the mud. The camp caretaker and a few other guys are trying to rescue a baby elephant stuck in the mud. At once I realize the racket at night could have been its mother, trying to save her baby. They’re all covered in mud, trying to get the baby elephant out, but they’re struggling. 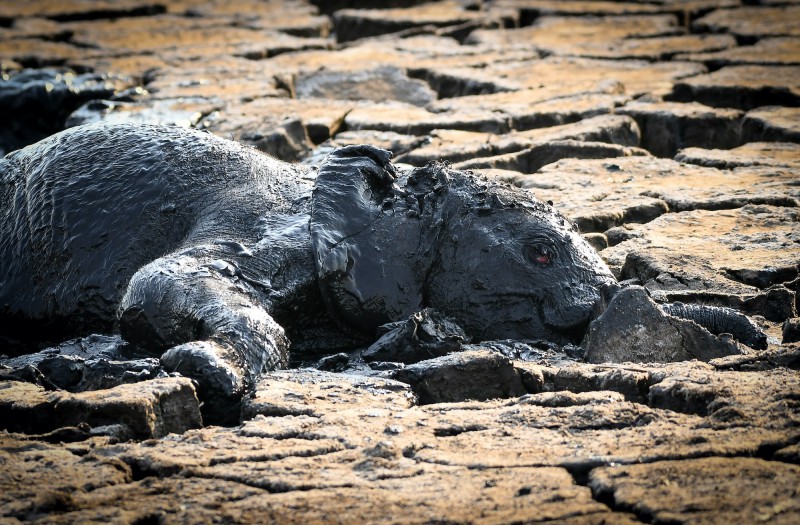 „We must go and help them now!“ We’re considering all the possible risks. Its mother could be nearby and trample us to death. The pack of hyenas could be lurking around having their eyes on the little one. It is an open plane and so we decide to go. Ondřej quickly takes his camera. This moment has to be recorded. 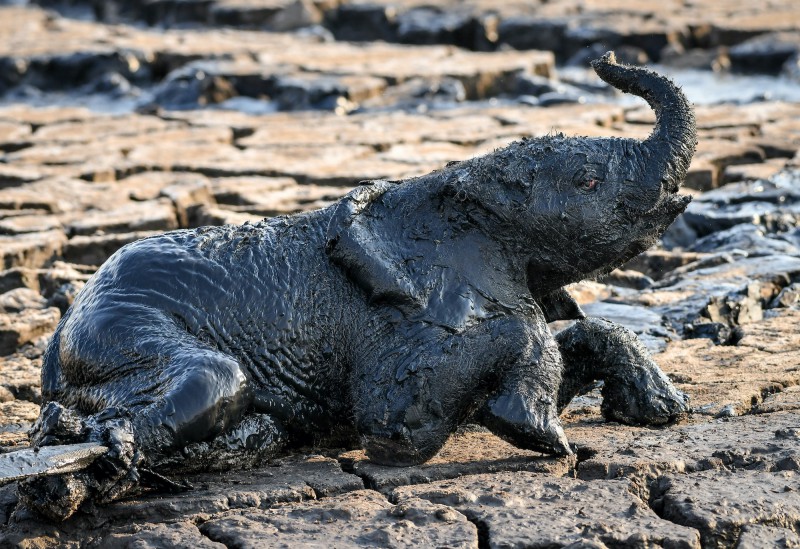 Baby elephant is trying to escape from mud

We’re braking about ten metres from the mud. If we come any closer, the car will get stuck as well. We bring out the winch. Luckily, the rope is at least fifteen metres long. We tie it to two straps and fasten these around the baby elephant’s front legs. The caretaker’s eyes are glued to the binoculars, carefully monitoring any movements in sight. He seems quite nervous as well. It’s a matter of life and death and the rescue operation starts now. The baby elephant is helplessly lying in the mud. It’s so exhausted it can’t even move its trunk anymore. Each and every second counts. It’s only a few weeks old. We’re slowly starting to pull. “Stop!“, one of the helpers exclaims, his dark skin even darker as he’s all covered in mud. 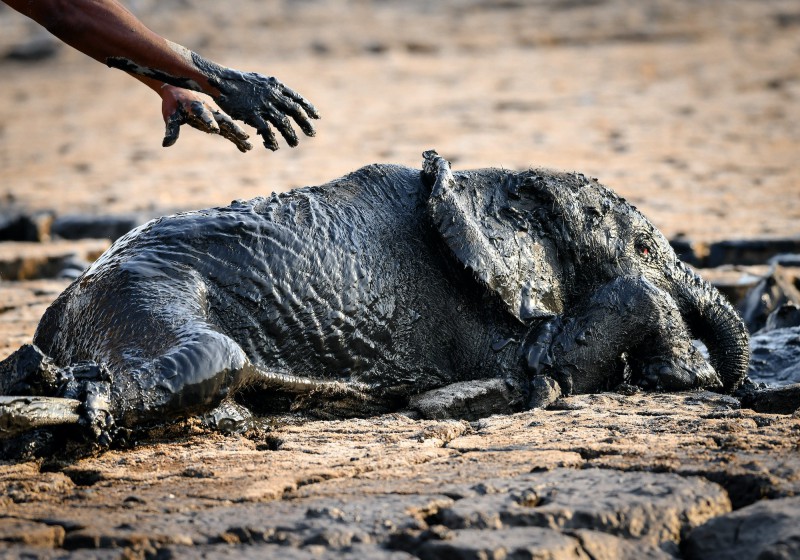 We manage to pull it out somewhat, but it turns to the side and pulling further like that we could easily break its leg. We’re undoing the rope, fastening it better and pulling again. Little by little we’re towing it out. How lucky we were to practice yesterday with the Spaniards! This time instead of Spanish ham, the reward is a rescued life. We’re washing it, it can’t stand on its feet. It’s completely exhausted, sucking Martin’s fingers in search of milk and its mother. The baby elephant wraps its trunk around my palm. We’re trying to make it walk, at least to the camp where we can take better care of it, but after a few steps, it’s too tired to continue. Martin is sending the helpers to fetch a cart and a blanket. The baby elephant lies on it and we’re moving it to the cart. 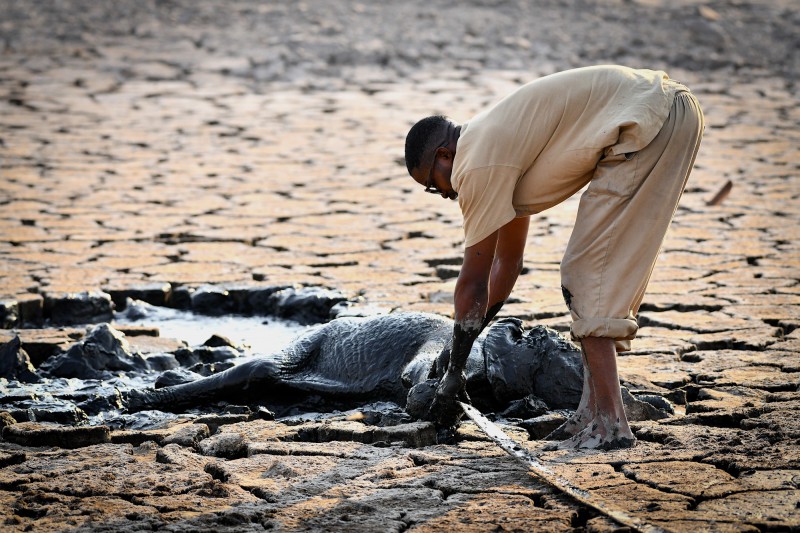 Hellping baby elephant out of the mud

We’re returning to the camp as heroes. We too need a good shower and a drink of water. We’re gulping it, the same water the animals were drinking from the water hole. The source is groundwater and it tastes much better than the bottled one. The baby elephant is getting water as well while the caretaker calls the rescue service via a satellite phone. It needs to eat or it will die. Its fate has been decided. It will be taken to an elephant orphanage. There it will receive care until it’s old enough to be set free in the wild. There’s no chance to find its mother. She’s not going to try to find her baby either. This is not a fairy tale. It’s wilderness and it’s rough. We’re leaving the baby elephant to its fate. It’s in good hands. Time has come for us to get going further to the south, to the delta of Okawango river. I hope when we return next time the rescued elephant won’t crush our camping gear. 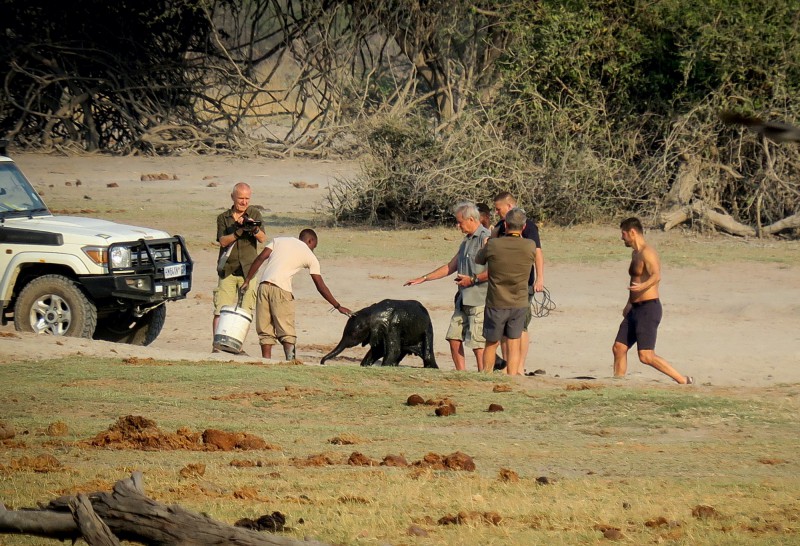